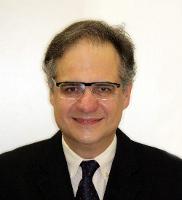 Born in 1966. He received the Laurea Degree in electronics engineering in 1992, and the Ph.D. in electronics and communications at the Politecnico di Milano, Italy, in 1995. Assitant Professor since 1996, he has been appointed EE Associate Professor in 2002 and Full Professor in 2015 at Politecnico di Milano where he is currently teaching “Mixed-signal circuits”. Initially he has worked on solid-state photo-detector and the associated front-end electronics. His current research interests include design and analysis of integrated circuits for communications in bipolar and CMOS technologies. He has contributed to the development of new IF-sampling architecture, to the phase-noise analysis in oscillators, and to the development of integrated architecture of frequency synthesizers. He is co-author of more than 100 publications, published in international journals and conferences, and of the book “Integrated frequency synthesizers for wireless systems”, Cambridge University Press (2007). From 1997 to 2002 he has been a consultant of Communication Circuit Research Department at Lucent Technologies, Bell Labs. He also had research collaborations with other companies, such as STMicroelectronics, Ericsson Lab Italy, Intel.