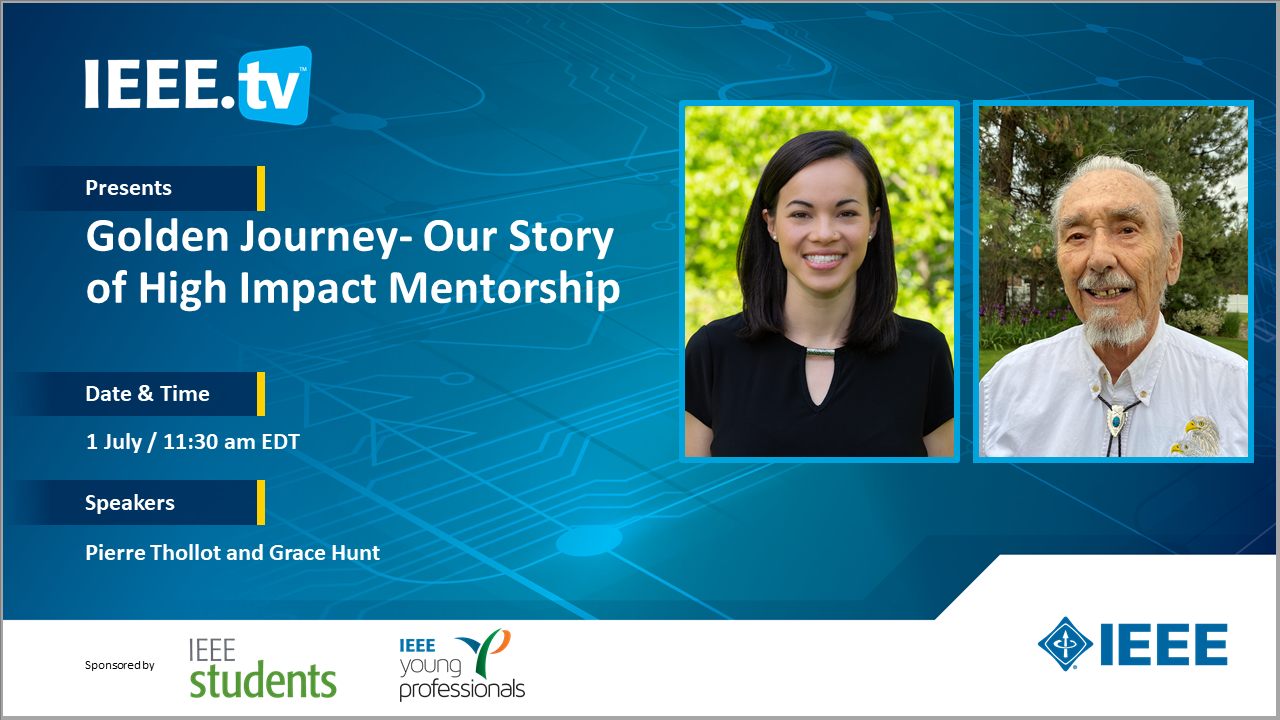 Pierre Thollot (88) and Grace Hunt (28) met during a professional engineering conference, established an ongoing friendship, and co-authored a book together about their combined and unique perspectives on the aging process called The Golden Journey. In this talk, Pierre will provide key insights on how he lived out a successful and meaningful career as a power engineer which included time at NASA, leading research at Sundstrand, and serving various key roles in IEEE and PELS, eventually becoming recognized as a IEEE Fellow in 1994. Grace and Pierre will describe the value of IEEE, mentoring, and intergenerational friendships in their careers and personal development and how to start the conversation with a person in a different professional or life-stage. Lastly, they will share about their book writing journey and what they hope their readers will gain.

Grace Hunt is a software developer with ActionFlow. She attended Davidson College where she studied Physics and Hispanic Studies. After serving as a research coordinator with a children's home, she returned for her MSEE, with a focus in Power Electronics, studying wide bandgap semiconductors at the Center for Power Electronics (CPES) in Virginia Tech with the support of the US Department of Energy (DOE). Grace says she loves nothing more than to seek out the adventure, both mundane and wild, in each person's story. She finds life in walking alongside others through the brightest and darkest times knowing that sharing in others' joy and grief is powerful and restorative. She currently resides in St. Louis, MO with her husband.

Pierre’s father and mother were born in France, and Switzerland. They emigrated to the USA, NYC separately in the mid 1920’s; met one another and married in 1928.  Pierre was born in1933, served in the Korean War as a military policeman and received his BSEE degree from The City College of New York in 1962.

He was hired by the National Aeronautics & Space Administration's Cleveland Lewis Research Center. While at NASA, he was promoted to Chief of a newly formed Power Electronics Branch within the Spacecraft Electrical Technology Division in 1971 In 1981 he left NASA to join the Sundstrand Corp. as an engineering manager responsible for aircraft and aerospace electrical power processing, management and distribution. In June1990 he was promoted to Director of the newly formed Electrical Research Division.

Pierre's career includes 30 years of voluntary serving on various Industry and Government committees and active participation in various professional organizations including serving on the Board of Directors of the Institute of Electric and Electronic Engineers (IEEE). His service and technical contribution to the field of electrical power, (power electronics) earned him the grade of IEEE Fellow in 1994.

He married Jenny in September 1953. They had four children, three boys and one girl. Their sixty-one year marriage, (Jenny passed away in 2014), grew to a family of 11 grandchildren, and 6 Great grandchildren.

Enter a brief, clearly worded question below and submit. Questions will be answered during the webcast in order of popularity and as time permits.

Be sure to visit the "Most Popular Questions" tab and vote.
* Required fields